This elitist pipe dream of open borders and world trade under a world bureaucracy has turned out to be the greatest, grandest boondoggle of our time. The world was simply not ready for Globalism.

While the war between the Trump faction and the Globalists rages on in DC, there are huge geopolitical realignments happening in the rest of the world. The era of free trade, Globalism and the highly-centralized, extraterritorial power of multinational corporations has come to an end. This elitist pipe dream of open borders and world trade under a world bureaucracy has turned out to be the greatest, grandest boondoggle of our time. The world was simply not ready for Globalism. In the end, the level of coordination and stability (most notably price stability) required to integrate and form a one world economy was too much for our current state of bureaucracy and technology to handle.

Individual bosses will often blame one-off factors: currency moves, the collapse of Venezuela, a depression in Europe, a crackdown on graft in China, and so on. But the deeper explanation is that both the advantages of scale and those of arbitrage have worn away. Global firms have big overheads; complex supply chains tie up inventory; sprawling organisations are hard to run. Some arbitrage opportunities have been exhausted; wages have risen in China; and most firms have massaged their tax bills as low as they can go. The free flow of information means that competitors can catch up with leads in technology and know-how more easily than they used to.

As a result firms with a domestic focus are winning market share.

The retreat of the global company

Although Globalism is over, the economic/petrodollar war and the oil glut continues as China and Russia will push their BRICS alternative to the US financial hegemony being run out of the Federal Reserve. The latter has suffered two substantial losses in the recent days- the loss of Turkey as a western ally to BRICS, the Chinese and the Russians, and the accession of Japan to the China International Payment System (CIPS).

The ramifications of the loss of Turkey are fairly substantive, as Turkey was a brick in a geopolitical wall the western powers established to keep Russia out of the resource rich middle east and Africa. But Japan’s membership in CIPS may turn out to be just as damaging, if not more so, than the loss of Turkey. CIPS is the primary alternative and competition to SWIFT, the western system of financial institutions and satellite networks that are responsible for securely communicating and clearing financial transactions around the world. That means the Japanese can skip purchasing the reserve currency of US dollars and allow Japanese banks to wire money directly to and from China.

The fact that the Japanese are able to do this without metaphorical, or literal, earth-shattering consequences from the West will be noticed. More and more nations in Asia may choose to opt out of SWIFT and artificially inflating the dollar. This is, without a doubt, a result of the fall of Globalism and the debt-finance model that has ruled America since the early 90’s, but I am 100% sure that the fake media will pin this on the Trump administration. This is a part of the mess that the President says he has inherited.

But the President did secure investment from the Japanese in terms of high-speed rail infrastructure, and the Japanese were even willing to invest $150 billion from their government run pension fund. This is a sign that American and Japanese interests are aligning on a long-term economic basis. The Trump administration has also focused on lowering the price of the F-35 fighter plane, which has overrun its budget by the billions. As Joseph Farrell at Giza Death Star pointed out, the US has been pricing itself out of the international weapons market by failing to reign in budget deficits on developing programs like the F-35. Countries wishing to modernize their military out of a fear of regional instability, countries like Japan, may be interested in such a program. 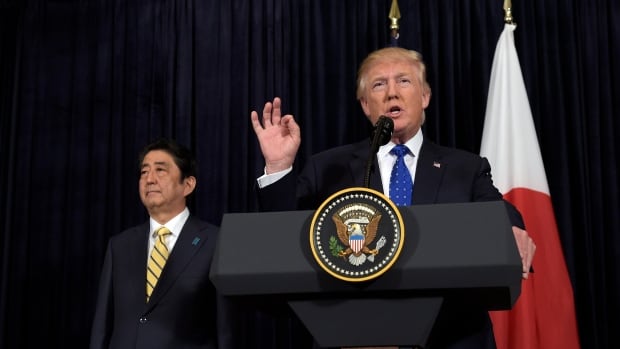 During the meetings between the President and the Japanese Prime Minister, North Korea performed another test launch of a long-range missile system capable of striking US soil. The two leaders of the US and Japan issued a joint response, condemning the missile test and reaffirming their alliance and coordination against North Korean missile threats. Although issuing such a statement was a pretty standard affair, the implications behind this alliance caught my attention.

If you’re aware of China’s intention to build a continent-spanning electrical grid running on green energy, you may know Japan was the one who proposed this giant infrastructure plan. It’s no secret that the Japanese have been looking to get away from nuclear power, and one project started in 2015 involves sending into orbit a series of satellites covered in solar panels to collect energy directly from the sun. This power would be beamed down to earth in the form of microwaves to a receiving station, a “rectenna,” where it would be converted back into electricity and distributed via Ultra-high-voltage power cables currently under Chinese development.

Meanwhile, JAXA is planning on testing the technology in space by 2018, with a small satellite transmitting several kilowatts from low Earth orbit to a microwave receiver on the ground. JAXA hopes to have a 100 kW satellite in orbit by 2021, and a 200 MW version by 2028. By 2031, if everything goes well, a 1 gigawatt commercial pilot plant will be in operation, with a full on commercial space-based power industry to kick off with one launch per year starting in 2037.

The reason why I mention this in a defense context is that, theoretically, any satellite that can efficiently beam energy to a specific point on earth could also be used as a weapon. A 1978 NASA study found that an older method using longer wavelengths required a rectenna at least 6.2 miles in diameter. That is a huge area of effect for any potential weapon.

But the Japan Aerospace Exploration Agency (JAXA) has been experimenting with shorter wavelengths and achieving “pinpoint accuracy.” This sort of accuracy would be much more useful as an anti-missile defense system, and combining this capability with Japan’s proximity to a North Korean launch means that such a device could be quite useful during the short but vulnerable boost phase of a missile launch.

With Globalism dying in a ditch and US and Japanese relations substantially restrengthened, the ball is now in Russia’s court. Putin knows that siding with the Chinese will mean that Russia will always play second fiddle next to the modernized, industrial behemoth of a workforce of the Chinese economy. He understands well the predatory nature of free trade and Mr. Global’s endless scarcity game of debt-financing and austerity, but Russia and China’s interests are already heavily tied together. Judging from Russia’s recent actions and their overarching geopolitical goals, Russia and China will continue to work together in the foreseeable future, but Russia, and Japan, seem to be inching closer and closer to the detente balance of power and away from the Old World Order.